Title IX of The Education Act of 1972 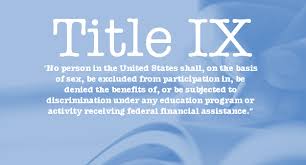 Out of all of the laws involved in campus sexual assault and intimate violence prevention and response, Title IX is the oldest and probably the most far-reaching.  Okay, so let’s delve into a little bit of history. On June 23, 1972, President  Nixon signed Title IX of the Education Amendments of 1972, 20 U.S.C.. Title IX is a comprehensive federal law that prohibits discrimination on the basis of sex in any federally funded education program or activity.

The principal objective of Title IX is to avoid the use of federal money to support sex discrimination in education programs and to provide individual citizens effective protection against those practices. Title IX applies, with a few specific exceptions, to all aspects of federally funded education programs or activities. In addition to traditional educational institutions such as colleges, universities, and elementary and secondary schools, Title IX also applies to any education or training program operated by a recipient of federal financial assistance.

Because the law is so broad, there are many issues that tend to be examined under this law. The law tends to be used as a vehicle to hone in one any issue where women, in particular have experienced discrimination. the most usual suspects for example are athletics departments and science and technology departments, as women have traditionally been underrepresented in these areas.

But more recently, as a result of the 2011 “Dear Colleague letter” issued by the Department of Education in April of 2011, as well as the 2015 passage of the Campus SavE Act, the law is being used to  specifically deal with sexual assault and intimate violence on college campus. Because of this, interpretations regarding what the law actually means and covers is being expanded. Student activists groups are primarily responsible for a great deal of this expansion. Student activists groups have recently mobilized nationally, for a number of reasons, however,  one of the main ones is the perception primarily held by victims of sexual assault that, there is a too much incompetence and inaction on the part of  university officials with regard to the management of complaints of sexual assault and intimate violence.

Student Activism and the Law 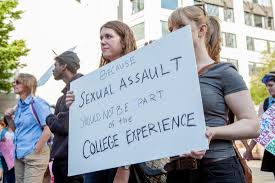 As a result many of these students, along with the assistance of advocacy groups that provide them with support,  have been involved with a massive movement has resulted in a flood of Title IX complaints being filed with the U.S. Department of Education. This recent increase in activism  this has been strengthened by new federal laws  and guidances targeted at  strengthening efforts on college campuses to prevent sexual violence and hold

perpetrators accountable. In addition, students activists and advocacy groups have been pursuing justice through the court system.