The law in twenty words or less: A students educational records are private, and by the way, they have the right to review those records. 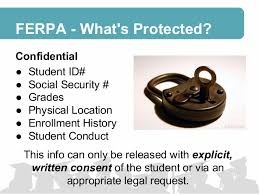 More In Depth Information: So what is the deal with  the Family Education Rights and Privacy Act of 1974, colloquially known as FERPA? Why would such a law need to be passed? Does anyone remember, (as I do) the  traumatic cliche “it’s going to be on your permanent record?” That used to be a thing. I think that has by and large lost it’s stigma (as we now live in a society where everything, everywhere is on everyone’s permanent record, always the internet is forever.)

But before social media, and before so much in the world was so transparent, (for better or worse) these so called “permanent records” were often deep sources of trauma, for people who suspected that erroneous or damaging statements, or facts had been placed on their permanent record, much to their detriment. Enter FERPA.

Prior to 1974, apparently information was placed on one’s permanent record and they often times had no knowledge of it or access to it.

Student’s were haunted by damaging labels or information that followed them through-out their secondary educational experience, which also apparently led to detrimental experiences later on. Neither the students nor their parents were able to to access this information and understandably that was problematic for them. FERPA attempted to correct this problem. As a result of FERPA,  parents were able to access their children’s educational records and once the children turn 18, that right transfers to them. It is important to note that FERPA also intersects with Title IX, with regard to the kinds of documents that may be produced during the investigation of an investigation of a Title IX investigation. These documents are also considered educational records. To that end, student’s who participate in these investigations do have the right to access and review these records. Schools may want to implement a specific policy with regard to these investigative records, as these records are highly sensitive and need to be protected somewhat for the purpose of maintaining the integrity of the investigation.

What does FERPA require schools to do: Schools are required to allow students over 18  access to their educational records; and additionally all school employees who access or create these records are required to keep the records confidential, only to be released to the appropriate party – parents of students under the age of 18, and the actual students themselves for students 18 and over.